We work throughout Ukraine 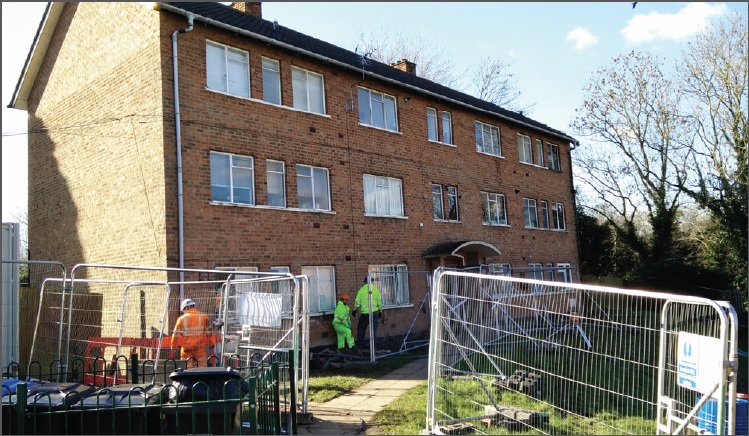 Residential building on the road to Birmingham, which was first commissioned in the 17th century. Historically, the end of the road leads to a farm and further to a large pond. Over time, the road and the land around it turned into a modern street with houses
at both sides. The area where the pond once stood was reclaimed and an apartment building was built. The lack of proper attention to geology and the heavy construction of the building caused subsidence.

A house of six apartments sank into the ground on one side. This led to a violation of the integrity of the entire structure. Cracks could be seen along the entire perimeter of the building, so a long-term solution was required to stop subsidence. GeoResin has developed a solution that reinforced the base soils with geopolymer resin to form a stable base with the required properties.

In order to achieve these goals, GeoResin used geopolymer resin in the subsidence zones to strengthen the soil and prevent further subsidence. Expansive geopolymer GeoResin resins were injected at points along 101 meters of load-bearing wall structures. The injection tubes were placed in the drilled holes at a depth of 2-3 meters. After the resin is applied, it expands with tremendous force, forming the basis for its further use as a support for the foundation.

The work was completed within two weeks. Throughout the project, no residents were required to leave the property, which is a significant benefit of using the injection process. The foundation soils under the property have been reinforced and provided with a solid support.

If you didn’t find an object or a situation similar to yours in the portfolio on the website, then order a specialist to select a project to analyze the pros and cons of technologies from the extensive database of completed GeoResin projects.
Order the selection of a GeoResin project
Back to projects
Leave a comment or ask a question
Standard projects and cost
Leave a comment
Send
Comments

We will contact you shortly.
File(s) were not uploaded - file size is invalid or too large:
Name:
E-mail:
Phone:
Time:
Square:
Object type:
Address:
Organization:
Close
Thank you for your comment!
Close

Leave your email and we will send you this article

Request a call back
Order object audit and assessment